The Multimeter is one of the coolest things invented if you ask me. This cool little box can measure invisible forces like voltage, current, and resistance, just to name a few. One other function is to keep you safe. But did you know that there are a couple of extremely dangerous situations where you can get hurt using a meter, and even cause it to blow up? For the most part meter manufacturers have pretty good built in safety precautions, but you need to remember that even the best meters have their limitations. So here are two situations that you need to be aware of when you use your meter.

What exactly are transients? Transients are not the guys you see walking on the side of the highway with all of their belongings on their backs, moving from one town to another. Transients are short surges, quick bursts of energy that are induced on communication, data and power lines. Typically they are extremely high voltages that have the potential to push large amounts of current through an electrical circuit for up to a few thousandths of a second. That may not sound like a long time, but if you’re on the receiving end of that, I’ll bet it would seem like a lifetime. Transients are unavoidable and most don’t do any damage. However, combining high-voltage spikes and high current can be extremely dangerous.

Where do transients come from?

Lightning always comes to mind as the main transient cause. However, there are a lot of other devices that can induce transients onto a circuit, many of which are internal to a facility. In fact, it’s estimated that 80% of transient activity at a given facility is internally generated. These devices range from copiers, coffee makers, vacuum cleaners, VFD’s, motor switching, and ballasts just to name a few.

What do transients have to do with meters?

I’m getting there. But first you needed to know what the enemy was and where it came from in order to protect yourself. So what happens with a worst case scenario with meters and transients? Simple. There is an arc that takes place inside of the meter. Let’s say you’re testing a piece of equipment and lightning strikes the power line somewhere. The lighting induces a transient on the line that finds its way to the equipment you’re metering, in turn causing the arc inside of your meter. When that happens….BAM!! You think a gun has gone off right by your head. As a natural reflex you pull the probes of the meter away from the circuit not thinking about the thousands of amps that are running through the test leads. At this point the leads act like a circuit breaker and draw an arc as you pull them away. If the arcs from the probe tips happen to join, they will create a phase to phase fault that will turn into an arc blast with extremely high temperatures. Is this always going to happen? No. The hope is that the circuit will open fast enough when the meter blows up. Is this a possibility? Absolutely. The best multi-meter manufacturers put a lot of effort into protecting the input circuitry from transients, thereby keeping you safe.

Another situation that you need to be aware of is more of a misuse of the meter. It’s not done on purpose most of the time but can have serious implications. The offense at hand is a person trying to measure voltage while the test leads are in the current terminals. Now, the fuse in the meter does offer some protection, but it’s not absolute. To properly measure current in low-energy circuits, you have to open the circuit and insert the meter leads in series. The current in the circuit needs to stay the same, so the input impedance from the meter must be low enough that it doesn’t affect the current in the circuit. Once you’re done measuring the current, it’s easy to forget to change the leads over to the proper terminals to measure voltage. If the test leads are left in the terminals that measure current and are accidentally connected across a voltage source, the low input impedance essentially becomes a short circuit! It doesn’t matter if the selector dial is set to volts or amps, it’s the physical location of the leads. They are still physically connected to a low- impedance circuit. That’s why manufacturers protect the current terminals with fuses. They are the only thing that differentiate between the inconvenience of blown fuses and a potential disaster. 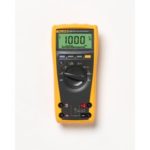 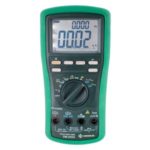 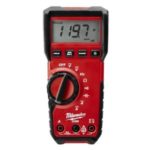 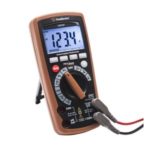