There are a lot of different ways to categorize reciprocating (piston-type) air compressors: horsepower, CFM output, frame type, tank size, the list goes on. All of those are pretty self-explanatory. An often overlooked and misunderstood category, however, is the number of compression stages. Your options here are either single-stage or two-stage and knowing the difference between them can help to ensure that you’ll end up with the right air compressor for the job. The following post will explain the difference between single-stage and two-stage air compressors, while outlining recommended scenarios for each.

It’s All About The Pump

The number of compression stages is determined by the configuration of the pump. Air compressor pumps come in a wide variety of shapes, sizes and piston configurations, so, to avoid muddying the waters, this post will focus on single- and two-stage belt-driven pumps that have two pistons.

As you’ve likely gleaned from the introductory paragraph, the biggest difference between the two types is that single-stage pumps compressed air once and two-stage pumps compressed air twice. The most noticeable difference is the shape of the cylinder, which is where the pistons are located. In a single-stage pump, both pistons are the same size so both sides of the cylinder have the same physical dimensions. In a two-stage pump, there is one low pressure (large) piston and one high pressure (small) piston. In this type of set-up one side of the cylinder is visibly larger than the other.

Let’s look at the steps that the air goes through as it travels through the pump and to the tank:

As the pistons draw down, air is sucked in through the filter element and past the intake valves, into the cylinder. While the crankshaft rotates and the pistons are pushed upward, the air gets compressed as it is forced up through the exhaust valves. From there, it travels through the discharge tube and check valve, down into the tank where it will stay until the user demands air. 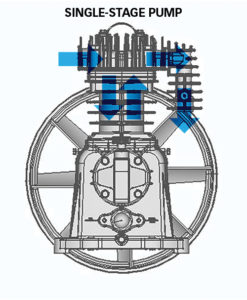 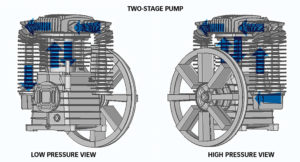 Each One Has Its Place.

In general, two-stage air compressors are more efficient, run cooler and deliver more CFM than their single-stage counterparts. While that may seem like a convincing argument against single-stage models, it’s important to realize that they have advantages as well. Single-stage compressors generally cost less, weigh less and electric models draw fewer amps. Which type is right for you depends on the work you do. Single-stage models are great for individual tradesmen or small crews who are framing, sheathing, roofing or doing trim work. For larger construction crews or applications that require large amounts of air over extended periods of time, two-stage compressors are the go-to option.

This post was written by Corey Nampel, Marketing Manager of ROLAIR. ROLAIR Compressors have been serving the needs of the residential contractor since 1959. To see more of their posts, visit the Zero Sick Days blog.