What kind of laser do you need? Red? Green? The answer depends on your application and your requirements.

The question of red beam lasers versus green beam lasers hasn’t changed for users of cross-line or plane lasers, whether professionals in the trades or DIYers. And the answer hasn’t changed either since it’s all about the application and how the work gets done.

Red beam and green beam cross-line or plane lasers provide horizontal and vertical lines for a variety of layout and leveling tasks. In most environments, the red beam option provides clear lines and professional results. If you’re willing to pay a little more, green beam lasers are up to four times brighter than red beams for the best visibility in bright ambient light conditions. Unlike older green lasers that used color conversion to achieve the green beam from a red diode, the best green lasers now rely on a true green diode.

In addition to their advanced functionality, today’s lasers include features designed to protect laser performance. For example, Bosch cross-line and plane lasers offer VisiMax™, an exclusive technology that allows for the brightest lines in virtually any job site condition. 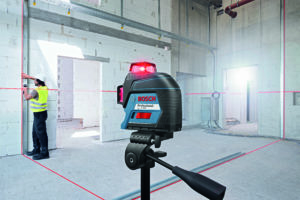 Long runtime and ambient heat pose a risk to the laser diode due to potential overheating, which can cause damage. VisiMax constantly monitors the laser’s temperature to ensure that the diode maintains operational integrity for accurate alignment and leveling applications, as well as extending the life of the tool. 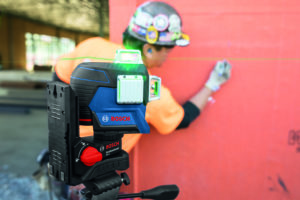 Working conditions and environment are the biggest factors in choosing between red or green laser products. But there are instances where the green beam offers advantages, including applications where ambient light is present. In this situation, the green beam is a better option because it’s more visible to the human eye.

Green line lasers are not new to the job site. The difference now is that technology has allowed these products to be much more affordable. Production of diodes has improved technologically and dropped the price, making green beam available to a wider audience.

The Bosch GLL3-330CG (green), GLL3-330C (red) and GLL3-300 (red) 360° Three-Plane Lasers deliver accuracy, long range and convenient all-in-one layout to meet a variety of tasks on the job site. The self-leveling 360° lasers provide one horizontal plane and two vertical planes with references that cover the floor, wall, and ceiling to serve all leveling needs. The two vertical lines cross at 90° angles so the user can quickly arrange and square the layout of any room from one position.

The GLL3-330CG and GLL3-330C are Bluetooth® connected, which brings an added measure of efficiency and convenience to the user. With upgraded diodes and brighter beams, these plane lasers offer a visible range up to 200 ft. diameter, increasing to 330 ft. diameter when paired with an optional Bosch LR8 receiver, which is compatible with both green and red beam lasers, for full job site coverage.

When it’s time to decide on purchasing a red beam cross-line or plane laser or a green beam version, the choice is yours. In most cases, a red beam laser will perform well and provide the accuracy and precision that professionals demand. But if there’s a potential for ambient light to creep into the job or visibility is essential, green beam is the answer. The cost difference between the two options is negligible when a pro user considers the potential hassles of dealing with insufficient line visibility.

If you’re still debating red vs green, you may also want to check out a previous blog article for more information about red and green lasers.