Professional tradesman from all aspects are demanding with their tools and no manufacturer is more aware of this than Klein.  For over 160 years Klein Tools has been making tools for the Electrical trade and we decided to take their MM600K auto ranging digital multimeter out for a test to see how durable it really is.

What Do You Do In North Dakota When It’s -20°F Outside? You play hockey of course. Instead of a puck we grabbed our Klein MM600 Digital Multimeter and went outside to see how well it holds up to the cold and shock of being hit by a blistering slapshot. We know that you would not normally do this to your meter but when you have to test a unit to the limits in a short amount of time you go to extremes. The rubber overmolding did a great job of protecting the meter from being hit with the hockey stick and from being bounced along the ice. 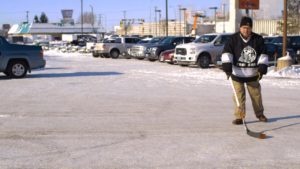 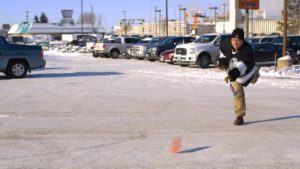 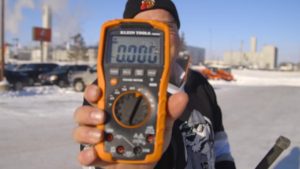 Klein is proud to advertise that their MM600 multimeter can withstand a 2 meter drop test.  We decided to drop their meter from their claimed top limit several times. Hopefully you will not have this much trouble keeping the meter in your tool pouch. 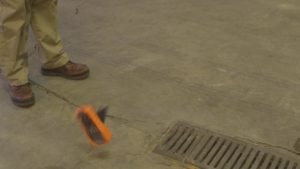 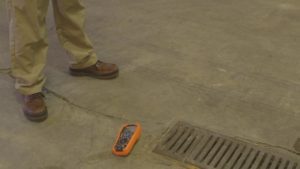 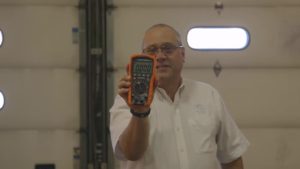 After several drops and trying to have it land on the face, top, bottom, and sides we know that they have us beat.  If you are constantly climbing up and down ladders, on and off lifts, or even up and down stairs while on the job there is no need to worry about dropping this meter.  Klein has added all of the protection necessary to keep you up and running if an accidental drop were to happen.

Do you store your tools all by themselves? Like most tradesmen the end of the day is a signal to remove some of the day to day weight by removing your tool belt and setting it into your service van or in a toolbox in the back of your truck.  Just because you carefully placed it there does not mean that the tools in it are going to be protected while you drive home.  To simulate the vibration and movement your tools take when not in use we decided to load an electric cement mixer with tools, including the Klein digital multimeter. 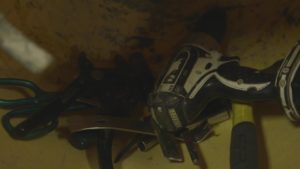 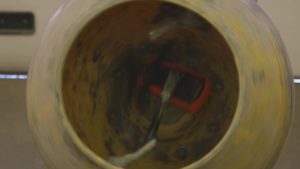 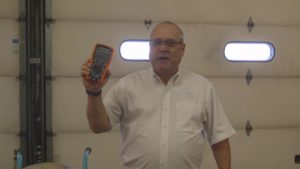 After 10 minutes of tumbling the Klein multimeter was taken out of the mixer and turned on, and like all of our other tests, the meter performed as promised.

The Klein MM600 Digital Multimeter handled all of the tests we threw at it and kept on going.  None of the tests brought the meter to fail and when we revisit our methods I’m sure that someone will have an idea that will push the limits.  Then again, Klein may have already done that testing.  To prove how well the MM600 is designed and built Klein has backed the meter with a Lifetime warranty.  They are not shy about letting their users know that they trust in the tools they make and Klein has a great following of users that are not shy about letting you know why your next tool purchase should be a Klein tool.