Acme Tools was proud to present Brad Near, @KnarlyCarl, a licensed plumber, with a Milwaukee M12 TRAPSNAKE Toilet Auger and Urinal Auger for his professional opinion.  Here is what he had to say: 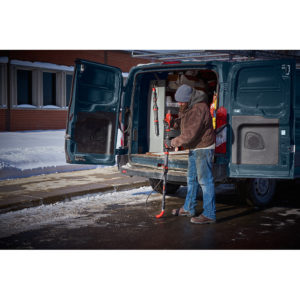 Milwaukee recently launched their new toilet and urinal auger system, which they named “Trapsnake”, and is powered by either the motor pack, or a hand crank, and is interchangeable. I received the urinal and toilet augers and was able to test out the system with the motor pack, which uses the M12 batteries. My first opportunity was to use the urinal auger on two separate units and I slapped on an XC pack for that service. I retracted the snake into the body of the auger and placed the rubber boot into the base of the urinal and started pushing the cable into the trap while giving the power pack about half trigger to aid in moving the cable through the trap. Of course, results may vary, but I was able to move the cable through the trap and into the drain pipe without a big hassle and without having to hand crank the auger.  I was able to determine the trap was clear at this point and spun the cable while moving it in and out as one normally would do, to help clear out debris in the line. As with any type of blockage, there is no one single answer as to what method works on every type of blockage. With that being said, running a urinal auger of this type generally does very little at helping the urinal drain better, and the end results usually involve pulling it off the wall and treating it with an acid and clearing out the drain from the wall. The “deposits” in urine builds up in the drain pipe and creates a crusty layer with which new layers are constantly being added to, making for a very rock solid blockage that no auger can clear effectively. The urinal itself is generally in good shape, it’s the pipes in the walls behind it that are where the blockage starts to form and cause the urinal to back up into the bathroom. When using the Trapsnake auger, it was very effective at moving the auger through the trap and into the drain pipe, all 4’ of it, and was very easy to do so versus hand cranking. I pushed the cable into the urinal, and then both Trapsnake augers extend to their full length (4’ for urinal auger, 6’ for toilet auger) by means of a release button which allows the cable to extend inside the inner tube, which then moves inside the outer tube.

There is a cable lock which is deployed by pushing the upper handle down into the clamp handle; this makes it very easy and, more importantly, very effective at locking the cable in place to aid in pulling the cable back if against a tight blockage, and for adjusting the cable length extension.  This cable lock is designed to hold the cable in place while pulling the inner tube back to extend the cable further, and to reverse the process when pulling the cable back into the auger assembly. It’s a great design in my mind and has worked great and takes no time at all to do. The other great thing on the auger itself is the rubber hand grips which makes it super nice to hold and operate. 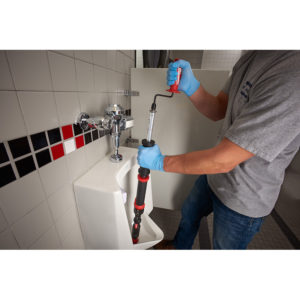 While using this Trapsnake in the two urinals, one cleared out and started draining better, but the other one was a different story altogether. The auger actually become trapped itself in the pipes in the wall, and I utilized the cable lock to pull the cable back out of the urinal. I had to brace my feet against the urinal and desperately tug on the cable to break it free. While I did get it to finally break free, I pulled the base of the urinal clean off the wall so I was just hanging by its supporting bracket on the top end! I removed the urinal to find the PVC male adapter had never even been glued into the drain in the wall, so I cleared the buildup in the drain while I had it off and reinstalled the adapter and then the urinal itself. While the Trapsnake got “trapped” itself, it actually found another problem with this fixture that I could perform a repair on before it started leaking, and therefore, eliminate being called back! 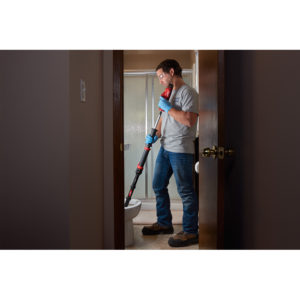 The toilet auger is the same design, with a longer, larger diameter cable, and overall auger body a couple inches longer. It is very effective at doing exactly as its description suggests, and I’m very grateful for the power behind the motor pack instead of using a hand crank. Just to clarify, the motor pack is used for both augers, as well as a hand crank if you wish to use some elbow grease instead; your choice. The retrieval bulb head on the toilet auger is a bit different design, with the bulb having a “hook” out the front after it tapers down as a bulb head does on a typical auger bulb head. The other difference is the rubber boot on the toilet auger curves to rest inside the base of the toilet, while the urinal auger rubber boot is straight in line with the auger, to prevent scratching the porcelain.

The power behind the rotation is, as mentioned before, the motor driver, and attached via a “reverse” ¼” quick connect such as found on an impact driver. I simply push the driver into the receiver on top of the auger and it locks into place, no pulling back on the collar. To remove, I do need to pull back on the quick connect collar and pull out the motor driver. The motor has plenty of power to clear blockages and will twist out of your grasp if you don’t have it held tightly! It is a bit large around, and doesn’t give a nice ergonomic grip like a drill does, but I have larger hands and was able to hold it quite easily, it might give others a problem, though. I found it worked well to hold it and use the trigger with my middle finger. The directional switch locks in the off position, and I am able to toggle between forward and reverse as I need. Operating in “reverse” turns the auger and the head “forward” but it isn’t like a drill and fastener that needs to turn “righty-tighty; lefty-loosey” ….it just depends on how the bulb head is oriented. So just keep in mind, if you need to turn your bulb head into the blockage to grab an object, operate the power pack in “reverse” and vise-versa. In one urinal, I had a 4.0AH XC M12 battery pack on the auger and it felt like it could twist the cable when I was against a very difficult blockage, but I was under the impression the motor would “cut-out” to prevent any major binding. At that point, it was very difficult to hold onto the power pack to counter-act the rotation of the cable, yet the motor had not cut out yet; I then stopped the motor and put it in reverse to relieve the tension on the cable. I do wonder if using a slim pack such as a 1.5AH or 2.0AH battery would deliver the desired results, but I had not experienced the “optimized electronics” Milwaukee claimed. The motor did wind down significantly and I could easily feel the twisting getting stronger, so there was plenty of warning before anything happened. Worst case scenario, I believe, is that the motor would twist out of your hand, no harm, no foul. In this urinal, I had run the motor a good solid minute or two, and again, was grateful I didn’t have to hand crank that! I’m not getting any younger and these battery powered devices are allowing me to work much more effectively.

Another unique aspect of the Trapsnake system is the cables are replaceable, which sounds like a first of its kind. I like that since the whole unit has much more involved than a simple toilet auger and more expensive because of the added features that a conventional auger does not have.

hese Trapsnake augers are the perfect replacements for the conventional systems available. This means they will be at least as effective as products that have been available for many years, with the added benefits of great ergonomics, a cable lock, and the power pack. Which also means a toilet auger will work great; a urinal auger will work great at clearing out the trap; but a urinal auger is still not going to be very effective on the majority of blockages beyond said trap. 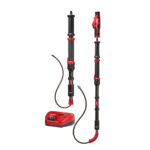 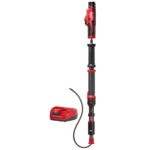 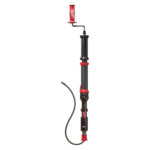